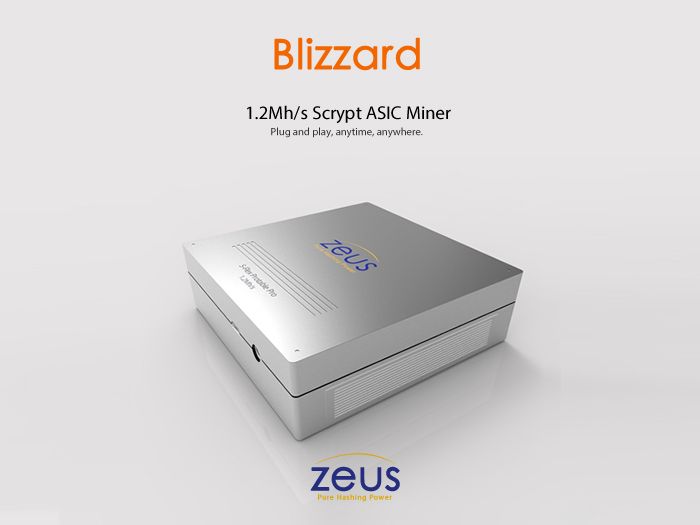 SKU
110990205
100% of 100
Be the first to review this product
Get started What: Litecoin is open source peer-to-peer cryptocurrency with limited release When: This is preorder ,worldwide delivery starts at end of Q2, 2014 Why: This the First Pure Scrypt ASIC Miner to ship in the world
Email
$238.00
Out of stock
^ BACK TO TOP

So much juice, so low power. LiteCoin mining has never been so easy before and affordable before.

ZeusMiner should be the first one to ship to general public, meaning you get several months ahead of people who ordered others. Also, ZeusMiner is best all-around if performance and price is concerned. At only USD$0.3 per Kh/s scrypt proof-of-work hashing power and power consumption as low as 10W per Mh/s.

We now have released two types of products and packages.

With our prior success with BitCoin (SHA-256) ASIC chips and competition heating up, we decided to shift our focus to Scrypt ASIC chips in 2013. ZeusMiner is born solely for the purpose of promoting scrypt based crypto-currency mining.

ZeusMiner is probably the first one to ship (shipping starts end of Q2, 2014) to general public at a price/performance superior to other announced.

What is Scrypt ASIC Miner?

An ASIC (stands for Application Specific Integrated Circuit) is a chip designed specifically to do one thing and one thing only. Scrypt ASIC miner is designed to do scrypt proof-of-work algorithm such as LiteCoin and DogeCoin. Since the miner is built around only for such purpose, at same power consumption level, ZeusMiner is able to provide 100 times increase in hashing power compared to all the previous technologies (like GPU and FPGA). Oh, have you also heard that using GPU for mining usually kills GPU in just a matter of months?