Those of you who had the pleasure of visiting Maker Faire Shenzhen this year may have spotted this huge and flashy IoT desktop clock in one of the exhibits.

Based on the creative style of word clocks like the ClockTHREEjr, the TimeSquare2 wooden clock takes it one step further by focusing on the concept of telling time in a more natural and cognitively appealing way.

Many word clocks spell out the exact time in words e.g. “it’s nine thirty-two” but if someone asks you what the time is, most likely, you would say about nine, bang-on half ten or a quarter past six-ish, etc. Our mind’s natural tendency for inaccuracy (or plain laziness) makes for easier interpretation. There is no need for minute details – and most clocks are off by a few minutes anyway.

The TimeSquare2 simplifies this by using words like “Exactly” and “Almost” to cover a short duration of time and instead of laying out the letters in a grid pattern, presents them as you would typically read them. 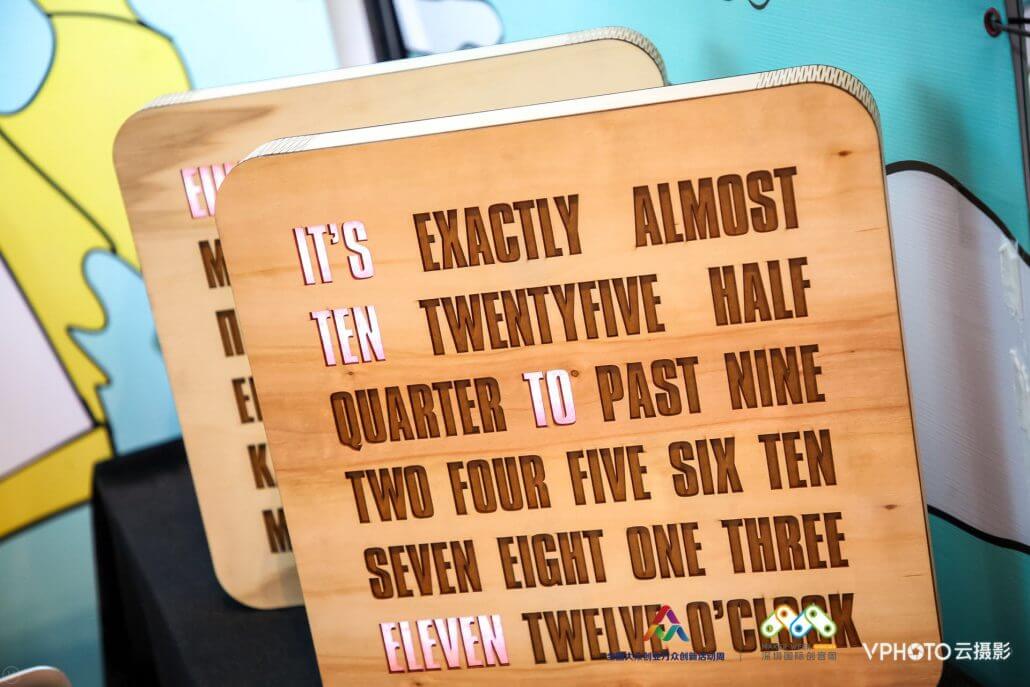 Combined with IoT connectivity, it never needs to be set or corrected and comes with a bunch of customizable features that can be uploaded straight from a smartphone.

This innovative clock is the brainchild of Chaihuo x.factory member Nikos Mouratidis, an expat from Greece and part-time maker. We had the pleasure of learning of his experience developing the clock in Greece and then moving development to Shenzhen, and we thought we’d share his experience with you too.

Every now and then, Nikos spends what little spare time he has off work in the x.factory makerspace working on the TimeSquare2. The first version began as a bit of fun four years ago in Nikos’ home country, Greece.

“This first prototype took 6 months to develop and development stopped at that time. It was just a hobby. Living in Greece you cannot easily move the development further. At that time, that prototype did not support WiFi or Bluetooth and needed to connect to PC to set the time. So, it was quite primitive in function.“ 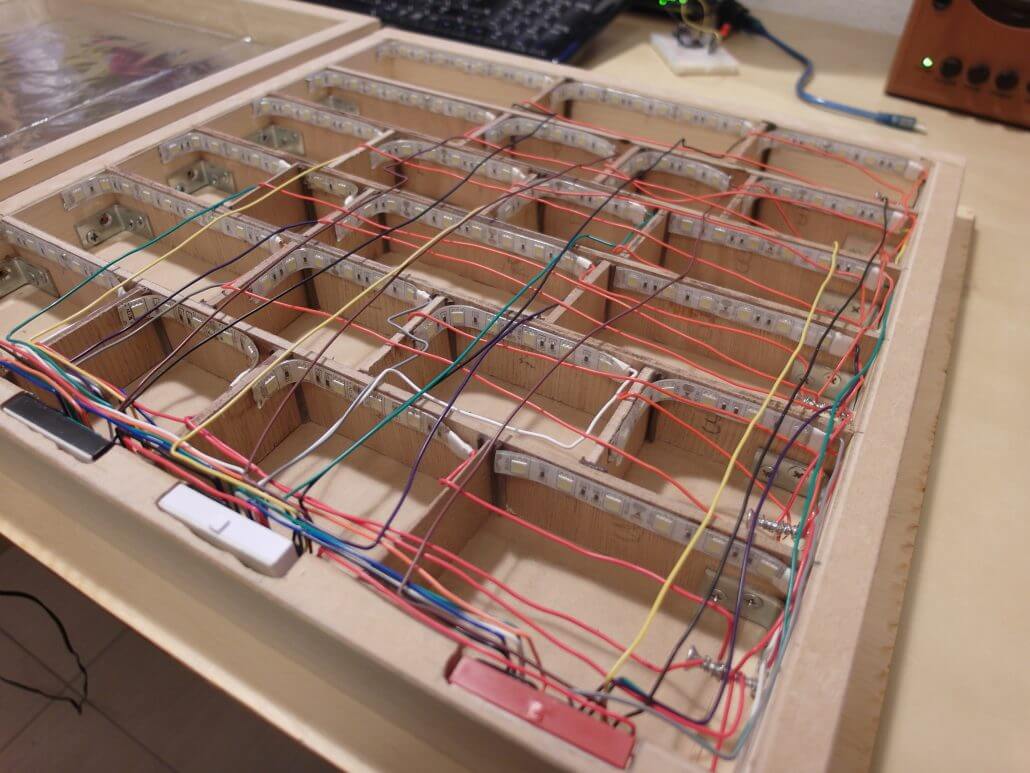 In the Greek language of course

As if the Silicon Valley of Hardware was calling out to him, Niko’s company provided him with an opportunity to relocate to Shenzhen, and that is exactly what he and his family did. And once settled in, Nikos decided to return to the TimeSquare project and looked up one of his favorite companies in Shenzhen!

“I knew Seeed Studio since many years ago when I bought my first Seeeduino. So, I looked it up on the internet, and I found that Seeed has a maker space called x.factory and I became an x.factory member at that time.”

“Since I know my way around electronics, my main problem was laser cutting. I needed to design my housing from scratch to be able to be manufactured 100% using laser cut plywood. x.factory helped me, and in 1 month I was expert at using the laser cutter.”

For the second version, Nikos’ enthusiasm at his newfound laser cutting expertise probably got the better of him. Look at all those layers! 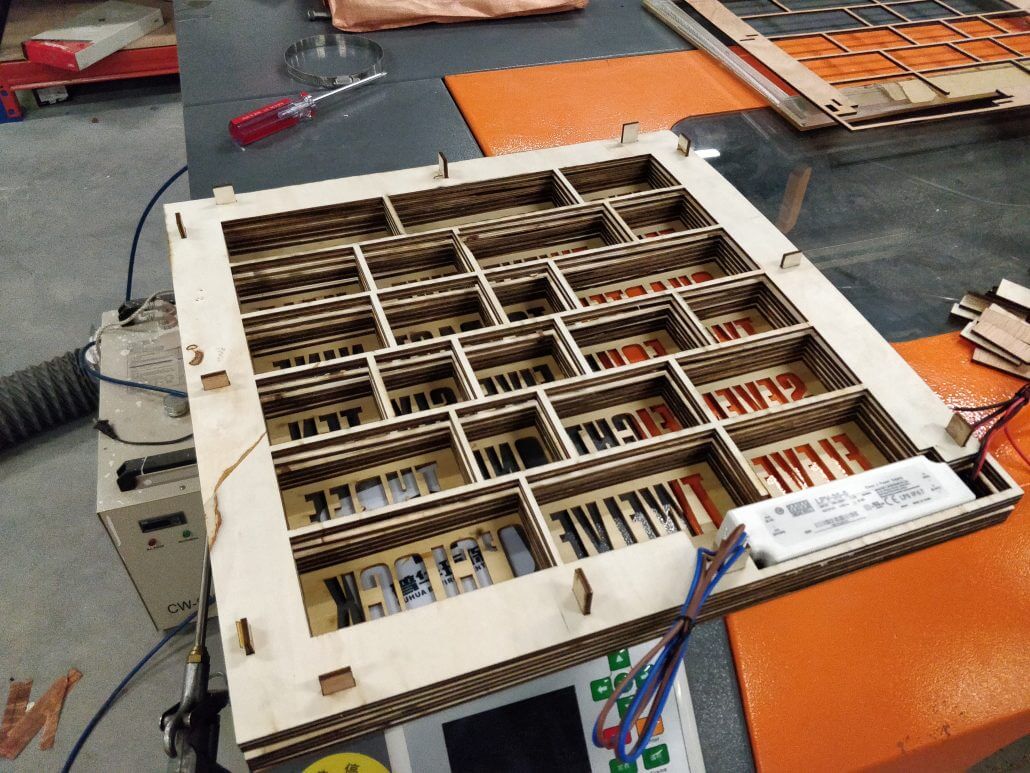 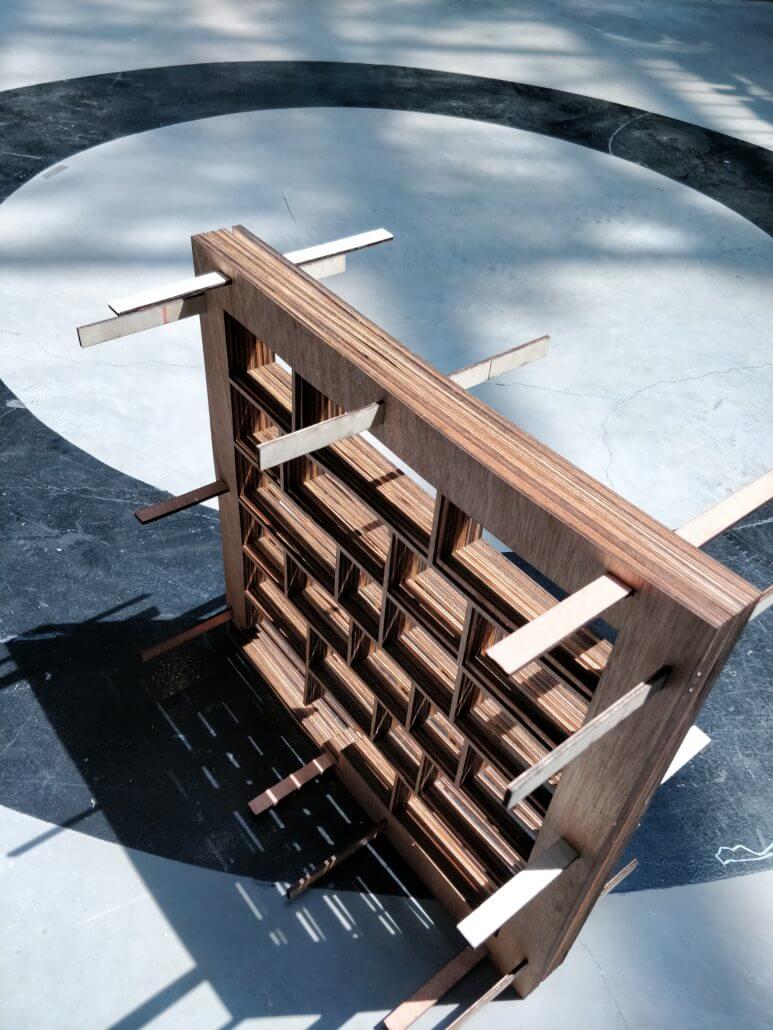 In fact, in the 6 months Niko’s spent on the project in x.factory, 5.5 months were spent on the housing alone. This version was very heavy and increased the material cost significantly. Nikos eventually opted to hollow out the interior where possible and use curved corners for a more stylish finish. 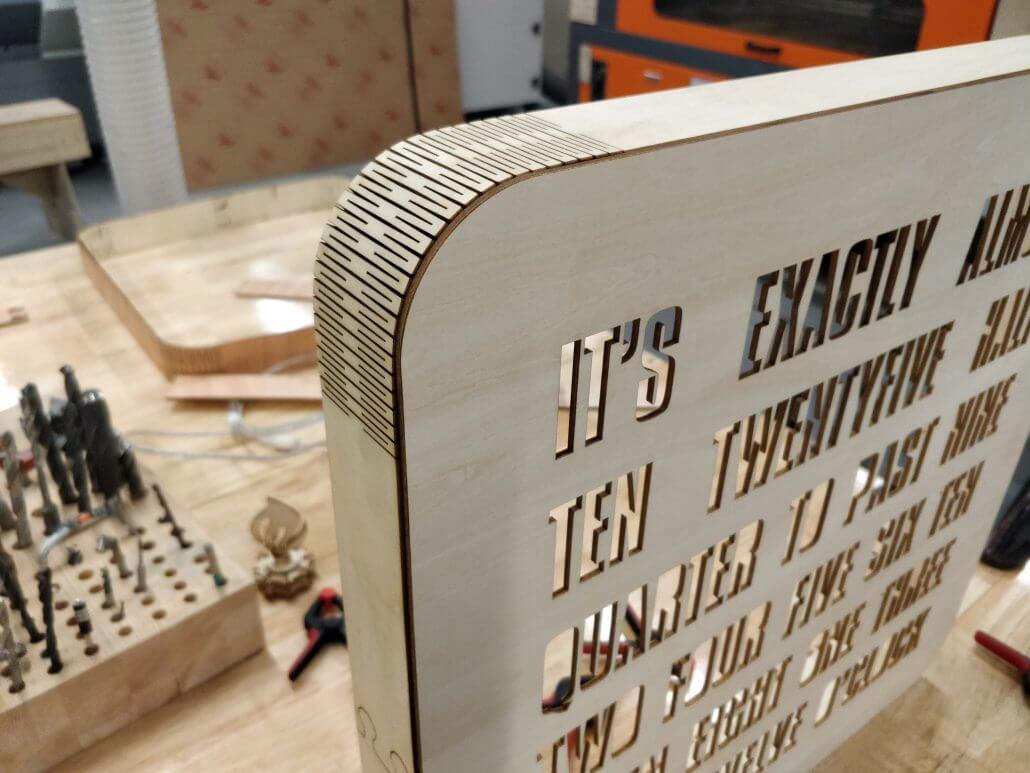 Electronics is more of Nikos’ thing, so all the circuitry and programming was completed in just two weeks. To replace the breadboard maze, Nikos decided to take advantage of another one of Seeed’s services, the Seeed Fusion one-stop manufacturing service to fabricate the prototype PCBs. PCB manufacturing is one of the most popular Fusion services and, like all Fusion services, everything can be handled online including instant quoting and order monitoring.

“My first order to Seeed Fusion was a quite big 19cm x 19cm PCB. The idea was that 4 of these PCBs would be tiled to form a huge 38×38 cm square PCB. Instead of dummy white LEDs, the new design used individually addressable RGB LEDs. Each PCB had a matrix of 30 LEDs (3 lines, 10 LED each). Totally, 4 PCBs, had 120 LEDs and I soldered the components by hand which was a pain!!!” 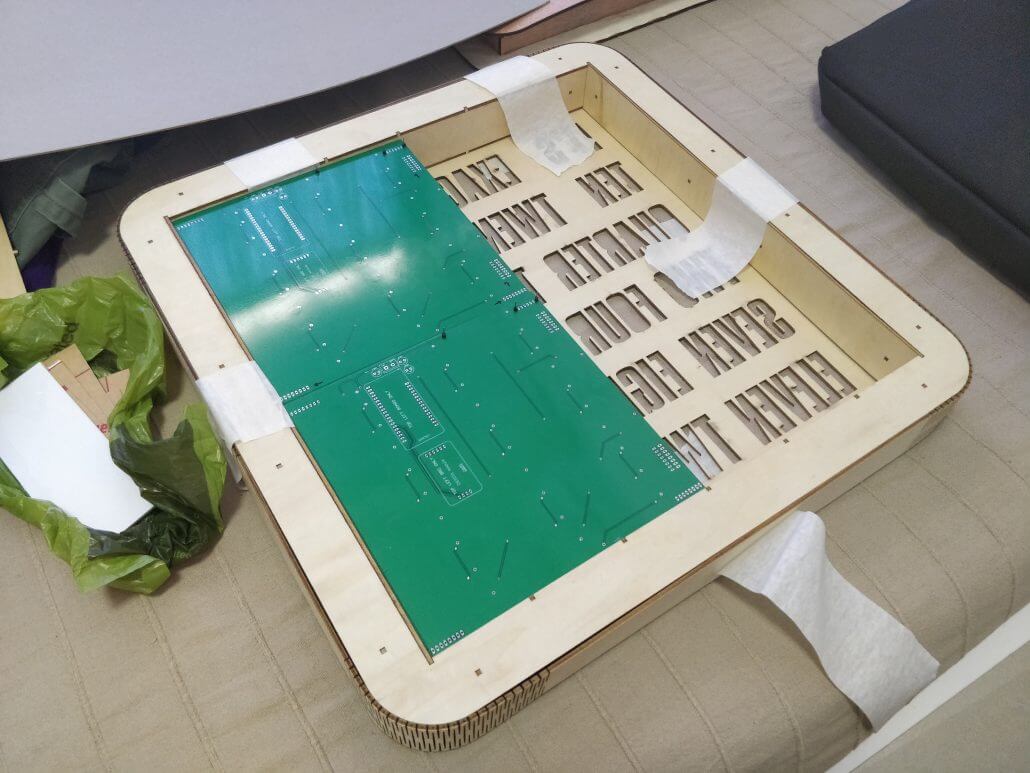 Four smaller PCBs are much cheaper than one huge PCB

“That was the main reason for my second Fusion order. I replaced ALL the components on my PCB design to be through-hole. That was much easier to assemble. Also, the connectors between 4 PCBs were replaced by soldering. Using this method, I constructed my first proof of concept prototype. The one you see on the video.” 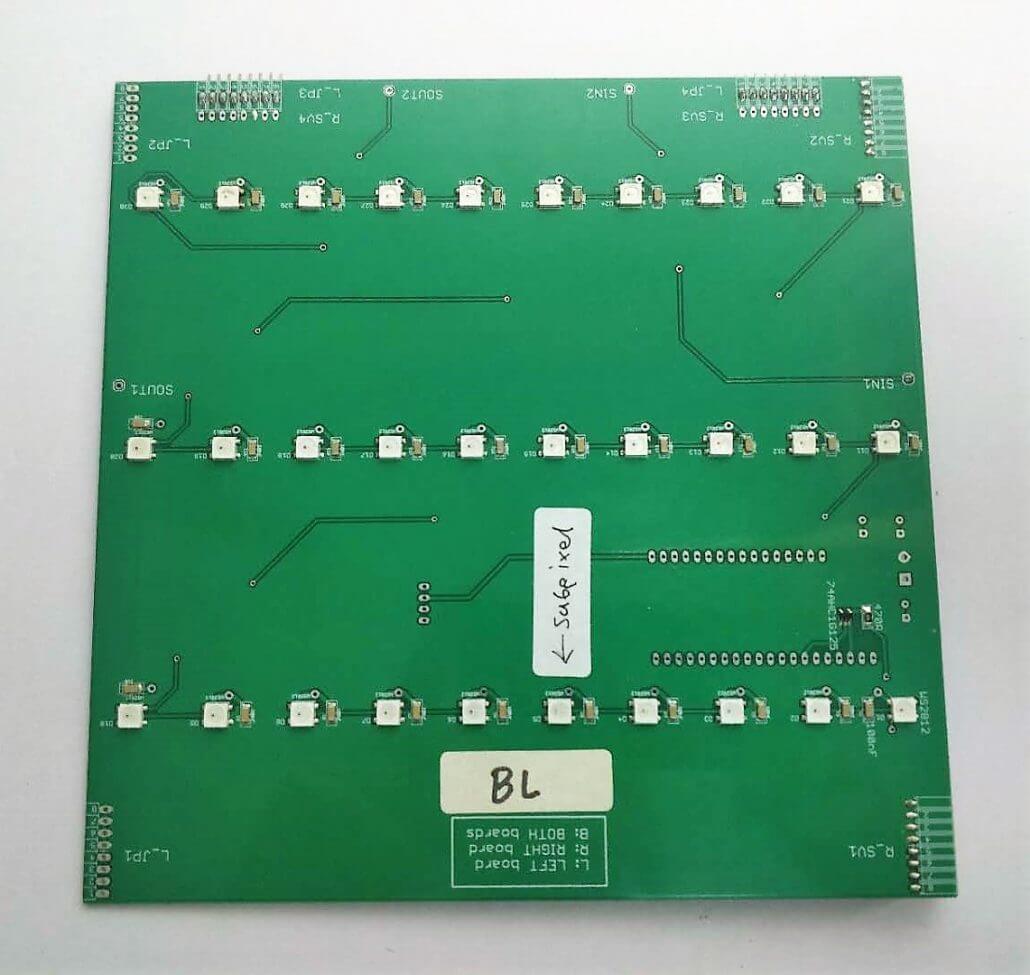 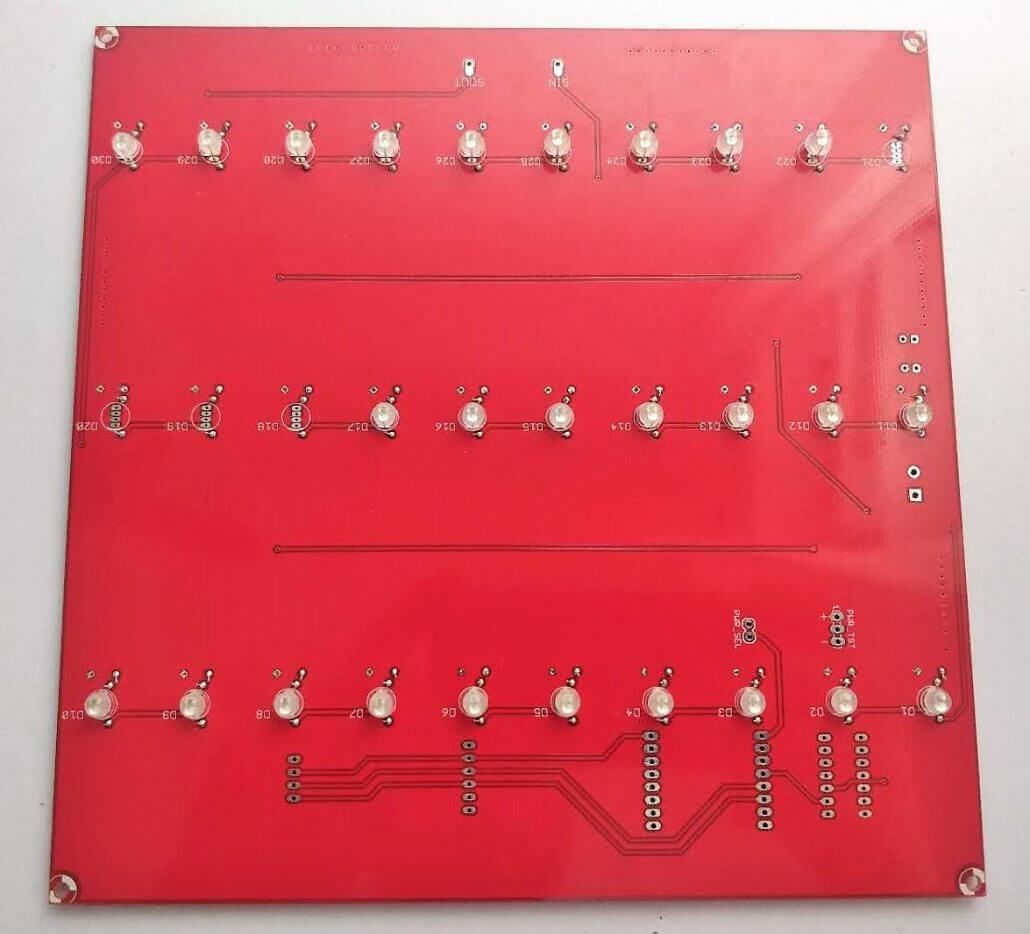 Converting from SMT to through hole

Design Tip: Whether or not one should pick through hole or SMT (surface mount) components is an important decision during the initial PCB design stage. For one-off prototypes and DIY kits, through-hole components should be used where possible – no one likes SMT soldering by hand. But for mass production, no one likes through-hole soldering unless completely necessary.

Here is the clock in action:

The next step for Nikos is to reduce costs and perhaps develop the clock for other languages and then it’s off to Kickstarter! Keep your eyes peeled! 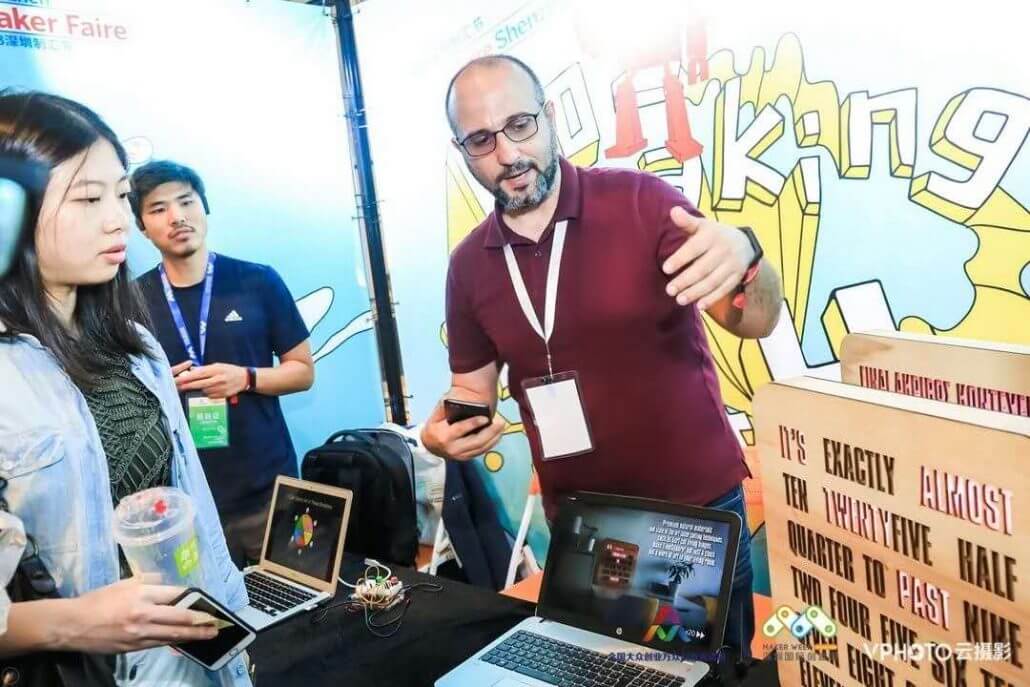 “x.factory is amazing and it’s not just about offering the space and the means to make. It’s about the people. People who don’t see their service to the maker culture as a job. It’s what they love to do. People who are eager to help in every situation.”

Chaihuo x.factory is operated by Chaihuo Maker Space, Shenzhen’s first and leading maker space since 2011, and closely partnered with Seeed. x.factory serves as an IoT hardware lab and maker space for maker pros with prototyping tools and equipment, as well as a community of tech partners. It is equipped with tools and materials for electronics assembly, 3D printing, CNC, carpentry for in-house prototyping and small-batch production services. In addition, x.factory collaborates with local supply chain ecosystem to provide makers more versatile resources, making it making the process of “prototyping–engineering sample–small-batch production–large-volume manufacturing” more agile and efficient for makers.

Seeed’s Fusion service offers one-stop prototyping services for PCB (Printed Circuit Board), PCBA (PCB Assembly) and other electronic and mechanical customized services such as CNC milling, 3D printing and PCB layout services. Seeed Fusion promises mature PCB manufacturing and fabrication with low costs, quick build time and 100% quality guaranteed. We are a Chinese manufacturer trusted by millions of electronic engineers, hobbyist and makers around the world. And here’s why:

Over 10 years of Industrial Expertise