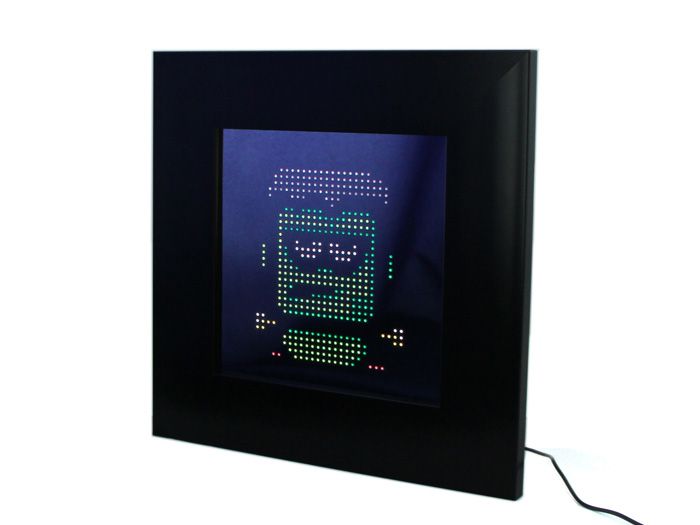 SKU
110990215
Be the first to review this product
PIXEL is an open-source, interactive framed LED wall display that allows you to send animations and images from an Android device or Windows PC
Email
$259.00
Out of stock
^ BACK TO TOP

PIXEL is an open-source, interactive framed LED wall display that allows you to send animations and images from an Android device or Windows PC.
Kickstarted in March 2013, PIXEL consists of a framed two-way acrylic mirror that houses a programmable, 32-by-32 LED matrix array (quick math: that’s 1,024 RGB LEDs), providing ample room to serve as your digital canvas for creating pixel art. Think of pixel art as Pointillism painting (using painted dots of individual colors to create an image) with tons of LEDs. Pixel art was an interesting phase for games and other mediums because it’s ‘8-bit’ style required a bit of imagination on the part of the user to “fill in the blanks”. Until the 90s, this was par for the course for computer and video games alike, but as graphics improved, pixel art was pushed out of the mainstream. The 8-bit pixel artform is experiencing an exciting resurgence however and PIXEL brings this art form to the LED medium.
At PIXEL’s core is the open-source microcontroller board called the IOIO (pronounced “yo-yo”). This programmable board was designed specifically to work with Android devices via USB or Bluetooth and can be controlled by Android applications that use its API. PIXEL pairs with your Android phone, tablet, or Windows PC and, with any of the ten and counting Android apps in the Google Play Store (or PIXEL’s PC Windows software), you can produce any still, animated, or interactive image you dream up. Since PIXEL relies on your phone, tablet or computer to be in bluetooth range, animated images will pause if the device running the app is disconnected. Once you send over a still image, it will stay on screen until you power off PIXEL. To get you started, the available apps provide over 100 still images and a score of animated and interactive images commissioned from pixel artists around the world.
A proximity sensor built into the PIXEL frame allows you to make images change or ‘interact’ with people as they enter the frame’s range. PIXEL also has three additional Grove ports accessible via the back of the frame, allowing you to connect and program up to three additional Grove sensors for added functionality and interactivity. The developer's page has all the information you need to write your own Android or PC Windows apps for PIXEL.
PIXEL is powered by a 4 amp 5V power adapter that plugs in on the back of the frame, where you’ll also find two hangers on either side for easy attachment to your wall. You can also replace the standard frame with your own custom modification. When PIXEL isn’t displaying an image, the two-way mirror pane can function as a mirror.
In the Box (Comes Fully Assembled)
More on PIXEL at http://ledpixelart.com
Note: Shipping is not included in the price and is separate. You can calculate the shipping costs during checkout.

If you encounter any problems when using this product, please contact al(at)ledpixelart.com for the technical support.