Spartan Edge Accelerator Board is a Xilinx Spartan FPGA development board in the Arduino UNO shield form factor. With the onboard ESP32 chip, it can also provide WiFi and Bluetooth functions.

In order to facilitate the selective development of the developers, SEA provides the shield form and the development form. The array of the board is not welded. The package contains a set of shield-shaped long-row pins and a set of single-plate short-row pins. It is convenient for users to select and use for welding.

When we talk about Arduino, very few people associate it with FPGAs. Because the two have little in common, to be frank, they are exactly the opposite.

Arduino - cheap to buy, easy to learn, simple to use, but can't deal with complex calculations and large projects.

FPGA - flexible and powerful, easily handle complex calculations like audio and video processing, but hard to learn and very expensive.

What if combine the two? Will there be a monster that is expensive, cumbersome and difficult to understand? Of cause not, it will be magic! It will be a game-changer that combines the advantages of Arduino and FPGA and eliminates the shortcomings of both. We present to you the Spartan Edge Accelerator Board!

Spartan Edge Accelerator Board is a Xilinx Spartan FPGA development board in the Arduino UNO shield form factor. It can work with Arduino as an FPGA shield and as a stand-alone FPGA development board. With the onboard ESP32 chip, the Spartan Edge Accelerator Board also features 2.4GHz WiFi and Bluetooth 4.1. Moreover, this development board has a wealth of peripherals and interfaces which are extremely playable. Such as an 8-bit ADC, a 6-axis accelerometer, two RGB LEDs, a MINI HDMI interface, a CSI camera interface, two Grove interfaces, etc. All in all, it will be a perfect FPGA board for Makers and Hobbyists.

We know you love ESP32, so we used it as the wireless core. It supports 802.11 b/g/n 2.4GHz WiFi as well as Bluetooth 4.1 with BLE. Just a single board to enable your Arduino with FPGA and Wireless function, isn't it amazing?

On top of that, we provide a full Arduino FPGA  API to help you use FPGA resources to control FPGA I/Os with Arduino IDE even if you know nothing about the FPGA theory. Spartan Edge Accelerator Board will equip Arduino with the ability that was once unimaginable, such as edge technology, image recognition, signal sampling and processing, and so on. 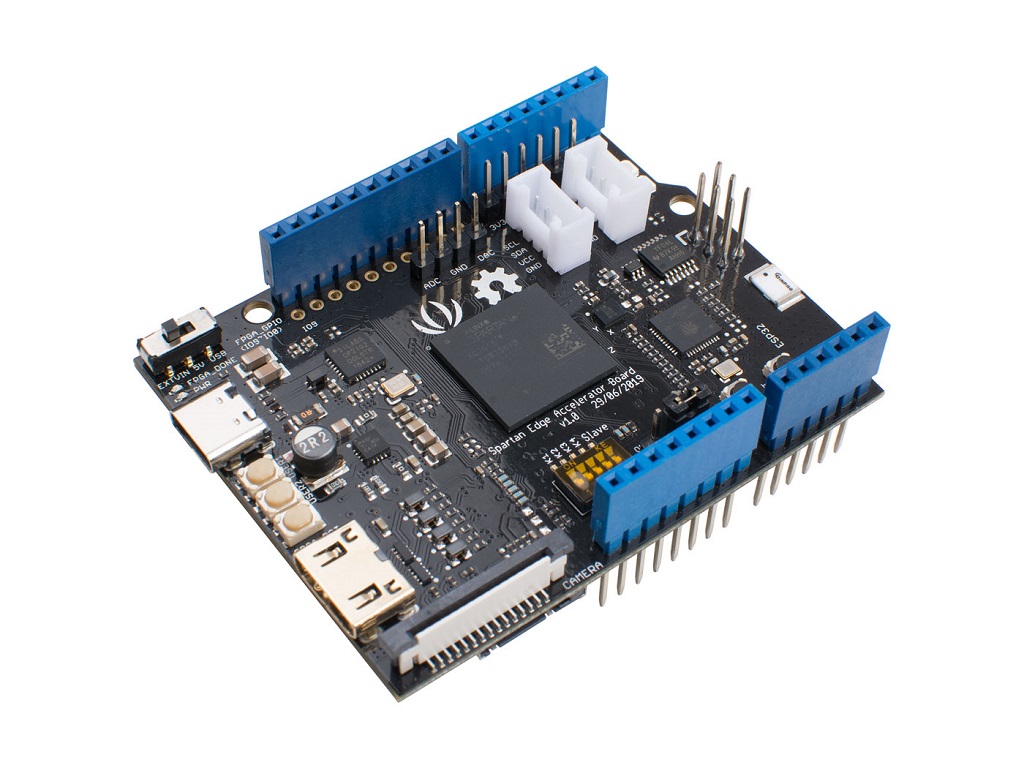 [] Spartan Edge Accelerator Board
This is the wiki page for this product, which will show you how to use the product, as well as details about the software and hardware.