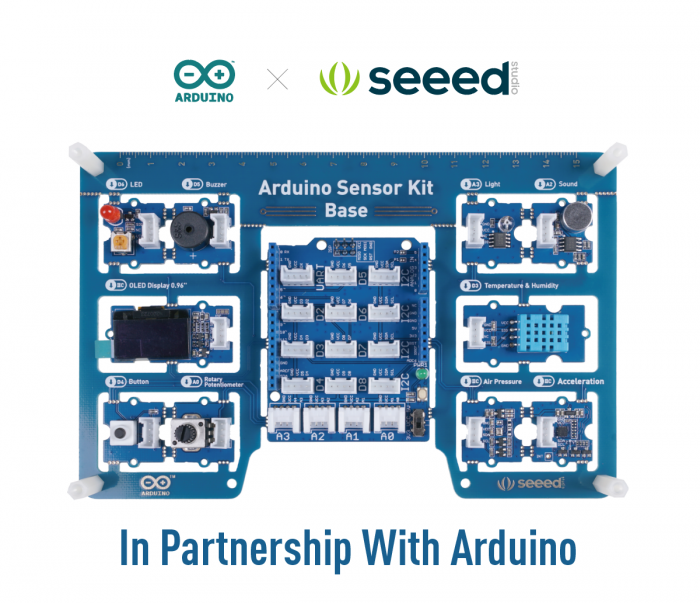 The Arduino Sensor Kit is a joint electronics starter kit from Seeed and Arduino. It integrates 10 commonly used electronics modules on one PCB, so no breadboard, no soldering, and even no wiring are required. The Arduino content team has also prepared a step-by-step tutorial for this kit. All these features make it an ideal Arduino starter kit for Steam education and online teaching.

Email
$28.50
In stock
Grove Beginner Kit for Arduino
Arduino Sensor Kit - Base
^ BACK TO TOP

To get started with a new thing is always difficult, and we've been thinking about how to make learning electronics and sensing the world around you easier than ever. We are proud to announce the release of the Arduino Sensor Kit - Base, a joint production between Arduino and Seeed. The Arduino Sensor Kit is a plug & play addition to the Arduino Uno to get you started with electronics and programming. It integrates 10 Grove modules on a single PCB, including 5 sensors, an OLED display, and actuators. Best of all, those modules are pre-wired, so no breadboard, no welding, and even no wiring! Proving that hardware doesn’t need to be hard.

To make it even easier there are step-by-step tutorials created by official Arduino. Arduino provides the Arduino Sensor Kit with an online platform with ten lessons to learn how to use the included modules. Each lesson introduces electronic knowledge and skills related to the module. Also, each lesson provides the complete sample code for you to run the project and start to understand the code behind the hardware part.

Please go to https://sensorkit.arduino.cc to find those high-quality lessons provided by Arduino.

10 Sensors and Modules Included in the kit

The Arduino Sensor Kit has exactly the same modules as the Grove Beginner Kit.

Difference between the Grove Beginner Kit

Half a year ago, we released the Grove Beginner Kit for Arduino. It has been one of the most popular products at Seeed. Hundreds of schools and educational institutions adopted the kit as the course material.

“Built into a single circuit board, but with snap-out modules, the Arduino Sensor Kit includes a range of common inputs and outputs.” by Gareth Halfacree, hackster.io

“The Arduino headers are exposed as well as the 6-pin ICSP header in order to connect it to the Arduino UNO board. If the ten sensors included in the kit are not enough, you can always add other Grove modules, or an Arduino shield to further expand the platform.” by CNX SOFTWARE

[Wiki] Getting Started with Arduino Sensor Kit
Step-by-step tutorial to help you learn to Plug, Sketch and Play with the basic Grove sensors, actuators, and the classic Arduino Uno. 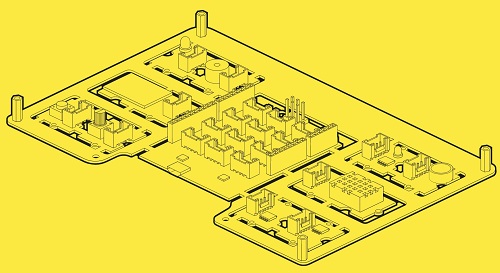 [Wiki] Powerful prototyping for every level -- blokdots with Grove Kit
Create your prototype step by step. Just focus on what you are currently facing, by simply connecting components like sentences, just like the one below. Click on the colored boxes to see some options!