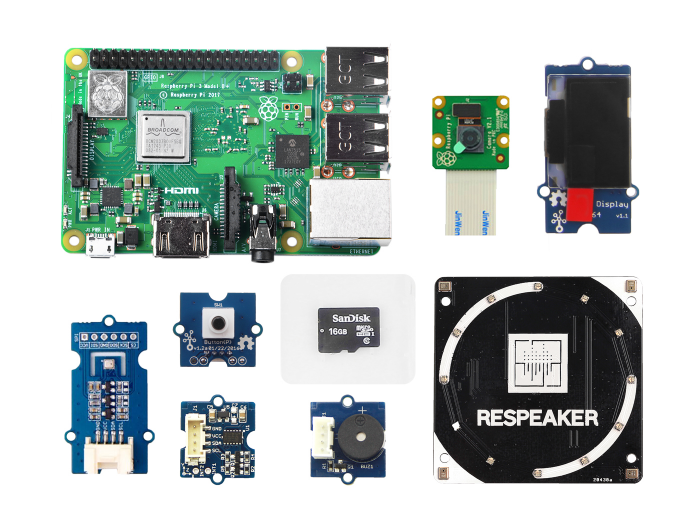 Azure IoT Edge is a fully managed service that delivers cloud intelligence locally, With Azure IoT Edge, you can seamlessly deploy and run artificial intelligence, Azure services, and custom logic directly on cross-platform IoT devices—from a small Raspberry Pi to large industrial machines. And manage it all centrally in the cloud with the security of Microsoft.

The kit includes the latest Raspberry Pi 3 B+ to run Edge, 4 well-selected Grove modules that act as sensors, display, and actuator. There are also a 4-Mic Pi Hat and a Raspberry Pi Camera Module in this kit, which brings more possibilities to applications like Face & Vision recognition, Speech recognition, and LUIS etc. with Microsoft’s cognitive services. What’s more, the kit also includes a 16GB SD card with pre-configured Raspbian image to bring out-of-the-box experience for the users.

Three Scenarios to Get Started

When deployed to a device, code in the image-classifier project captures video from the Raspberry Pi camera, sends images from the video to an AI module running image classification, displays the results on the OLED display, and sends results to an Azure IoT Hub.

When deployed to a device, code in the speech-recognizer project captures audio from the Raspberry Pi microphone, uses an AI module to recognize the speech and determine intent, responds with an appropriate response on the OLED display, and sends results to an Azure IoT Hub.