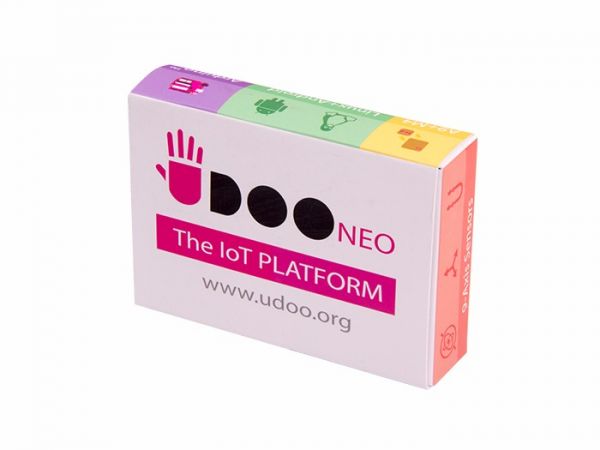 UDOO NEO is whatever you need to approach the world of makers.

Launched in 2015 and funded by thousands of enthusiasts worldwide through Kickstarter, UDOO NEO is an Arduino-powered Android / Linux single board computer enriched with 9-axis motion sensors, Bluetooth 4.0 and a Wi-Fi module.

The unique feature of UDOO NEO is its heterogeneous processor, based on two cores embedded on the very same chip. We are speaking of a powerful 1GHz ARM&reg; Cortex-A9and an Arduino UNO-compatible platform that clocks at 200 MHz, based on a Cortex-M4 I/O real-time co-processor, all wrapped into an i.MX 6SoloX processor by NXP.

UDOO NEO can be used in many ways. First of all as a low power computer attached to a screen, a mouse and a keyboard. In a second place it can be used as a ARM development board as well as a ATMEL development board. This is the context where the board shines the most, ensuring compatibility You can make the most out of it if you build a drone, a robot, a rover, a 3D printer, a home automation service, an autonomous system. Finally, it can be exploited as an embedded board, i.e. a board designed to work within an embedded context.

The most complete tool for wireless mobile IoT applications.

UDOO NEO FULL can be powered in three ways. You can use:

You can use it as a Headless Device, exploiting the USB and Ethernet ports and the Wireless Connectivity - a powerful Wi-Fi b/g/n and the newest Bluetooth 4.0. You can also use it as a computer, thanks to its 1GB of RAM. The board is compatible with most Arduino shields, sensors and actuators. UDOO NEO FULL is also compatible with UDOO Bricks: programmable modules, like the temperature sensor and the barometric sensor, that you can add to make UDOO NEO FULL even more versatile.