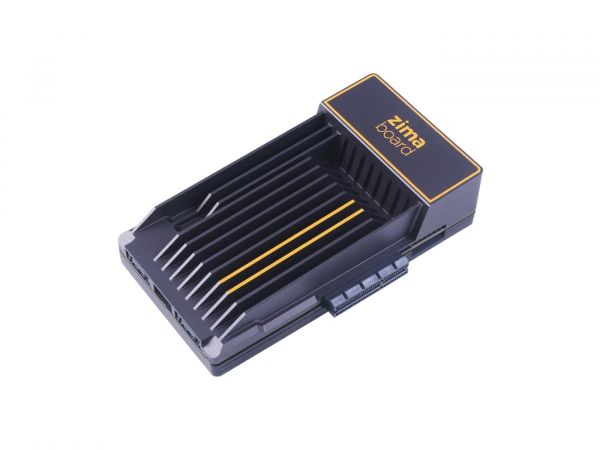 ZimaBoard 216 model is a low-cost single board server equipped with Intel Celeron N3350 Dual-Core working distinguishingly as a 4T free charge cloud server or a 4K display media server. It helps manage onboard 16GB eMMC and 2G RAM storage data at high speed and well security with the standard interface and secure VPN.

ZimaBoard 216 model is a single board server equipped with Intel Celeron N33500 Dual-Core operating at 1.1GHz to 2.4GHz which contains both the expandability of an x86 SBC and the standard function of a microserver. It can be applied as a personal Network Attached Storage(NAS) managing 4 Terabyte cloud charging free and the contribution is simplified that can be easily set up in 5 minutes. Meanwhile, the storage data traffic in the high-security single path by the configured highly concealed performance VPN. The user can apply it as a software router by tuning the network with OpenWrt and pfSense wirelessly. Through internet streaming, the single board server has the ability to display a 4K resolution ratio at 60Hz which means it can be built as an extra media server running with Plex. With the outstanding performance, the ZimaBoard single board server has very low energy consumption while it only costs 6W in Thermal Design Power(TDP). ZimaBoard has presented a unique physical structure designed for passive cooling.

Additionally, the single board server has 2G LPDDR4 RAM and 16G eMMC onboard storage. It also supports both HDD and SSD with two SATA 6.0 Gb/s ports and one PCLe 2.0x4 interface. It displays with Mini-DisplayPort 1.2 while it supports 4K video transcoding with H.264(AVC), H.265(HEVC), MPEG-2, VC-1 decoding. It has been installed Linux system by default, and yet it is compatible with a wide variety of systems including Linux, Windows, OpenWrt, pfSense, Android, and Libreelec. It suits makers and geeks in terms of benefits, convenience, multifunctionality, security, capacity, and compatibility.

CasaOS is changing the way families view modern living. From photo and video storage to smart home device management, and encrypted communications, CasaOS is the one-stop ideal home cloud system to keep families safe and protected in the digital age.

CasaOS is compatible with mainstream hardware platforms, x86 PCs, NUCs and Raspberry Pi, and provides enough openness for developers to participate in it. Users of CasaOS can host various home entertainment, streaming, network enhancement, and VPN applications free of charge, as well as centralize their personal data and sync 10x faster in a non-inductive LAN.