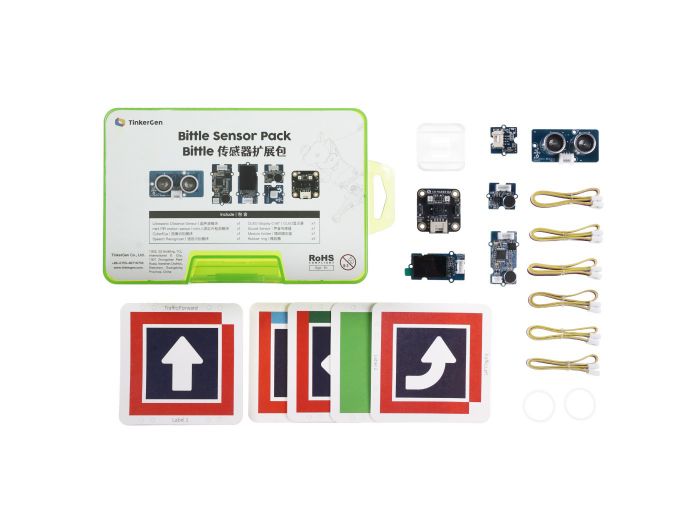 The Bittle sensor kit includes ultrasonic distance measurement, CyberEye, a 0.96-inch OLED display, and other modules. The robot dog Bittle can be used with these modules to achieve powerful functions such as visual inspection and language recognition in the field of machine learning.

There are following modules in Bittle Sensor pack:

Let’s discuss each on of these modules separately.

Grove - mini-PIR Motion Sensor
Grove - mini PIR motion sensor can detect movement of objects, people, or animals by picking up one's infrared radiation. When an object, such as a person, passes in front of the background, such as a wall, the temperature at that point in the sensor's field of view will rise from room temperature to body temperature, and then back again. The sensor converts the resulting change in the incoming infrared radiation into a change in the output voltage, and this triggers the detection. It is a digital signal sensor, which means it needs to be connected to Grove ports starting with letter D.

Grove - Speech Recognizer
Grove - Speech Recognizer can recognize 22 pieces of commands including 'start', 'stop', 'Play music' and so on. The wake-up word for starting speech recognition is Hicell. When it recognizes the wake-up word, LED turn red, then you can say the command word, if it recognize the command word, LED will turn blue. It is a digital signal sensor, which means it needs to be connected to Grove ports starting with letter D.

Grove - Sound Sensor
Grove - Sound Sensor can detect the sound intensity of the environment. The main component of the module is a simple microphone, which receive sound and convert it to electrical signal, which can be processed by Bittle mainboard. It is an analog signal sensor, which means it needs to be connected to Grove ports starting with letter A.

Rich extensions
Bittle's main board NyBoard V1 is a custom Arduino board with 4Pin connectors on the board. You can configure various Grove modules for Bittle to bring a totally new perception to Bittle.