Recently we began shipping the Azure Sphere MT3620 Development Kit, a joint effort by Microsoft and Seeed, and we also released a video (linked at the bottom) introducing this product, including a quick demo. I’d like to explain the demo here, but before that, let’s give a quick introduction to Azure Sphere. If you already know about Azure Sphere just skip the next three paragraphs.

IoT security is lackluster. Microsoft set out to change this by using a three-part system. First the dedicated hardware. There are two cores on the MCU which are not accessible to the user. These cores deal with security and connectivity. The security core has a unique signature recorded during manufacture – we will get back to this soon.

The second part of the system is a new OS, Azure Sphere. You may recall back in April, Microsoft was creating an OS based on the Linux kernel. That OS is Azure Sphere. This OS has memory management that allows multiple cores to share memory, while ensuring they do not overwrite something or gain access to something they should not be able too, thus helping to protect user code. In addition, the two special cores for security and connectivity (WiFi) are only accessible via API calls.

The final part of the puzzle is the Azure Sphere Security Service. Remember when each device had a unique signature? This is where it comes in to play for actual security. When your device connects to the Azure Sphere Security Service it will verify its identity as a legitimate device. This service also helps to push remote updates to devices in your customer’s homes, no longer requiring them to do the updates themselves, guaranteeing they have the latest security updates. 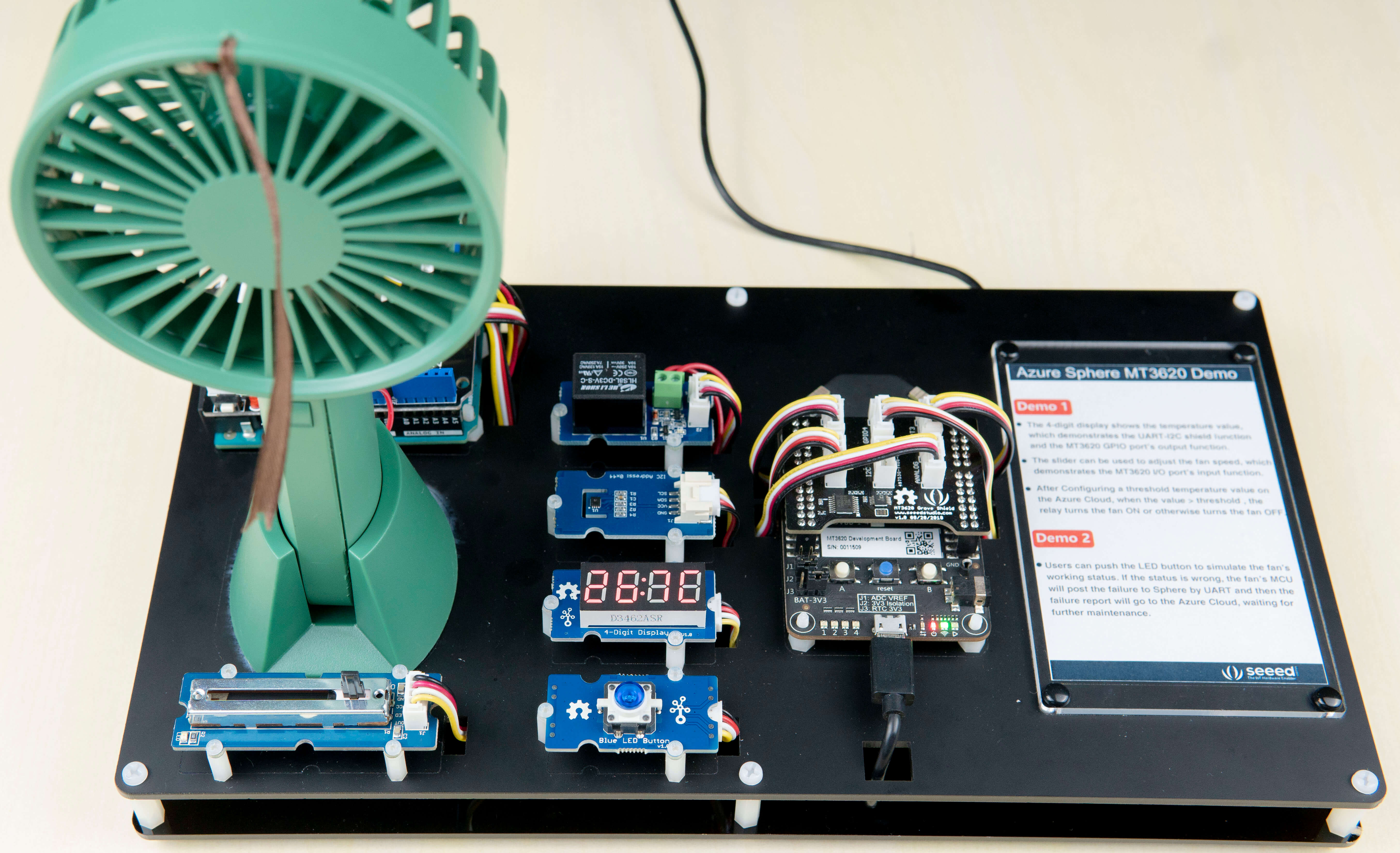 In this demonstration, we used four Grove modules out of our Grove Starter Kit for Azure Sphere MT3620 Development Kit and a device which has it’s own MCU (An Arduino connected with a fan). The Grove modules that we used here are the Grove – Temp&Humi Sensor (SHT31), 4-Digit Display, Slide Potentiometer and Relay, which are based on I2C, Digital, Analog and Digital interfaces respectively. Here the Arduino and the MT3620 communicate via UART.

Once the temperature sensor detects a higher temperature than a specific threshold, the Arduino connected fan turns on and the operational characteristics of this fan can be controlled by the Slide Potentiometer. In this demo, this potentiometer can be used to change the speed of the fan. When the temperature gradually falls down below a second threshold, the fan turns off. Also, we used an additional Grove shield in this demo to make the prototyping process very quick and easy.

Now I will talk a bit more about the SDK part of this demo. This will include a bit of how to connect to Azure IoT as well as the Device Twin. The Azure Sphere SDK uses Visual Studio. We’ll begin by connecting this demo to Azure IoT. Afterward, the solution is directly rebuilt to the device and the live temperature data is streamed back to the window. The Device Explorer window will show the device twin. A device twin is simply a JSON copy of your device in the Azure cloud, which means you have two copies of your device (One physical and one digital in the cloud). If you make any changes to the properties stored in this JSON file on the cloud will be immediately synced with your physical device and also changes made to your physical device will immediately be synced with the JSON file on the cloud. Once we grab the connection string from portal.azure.com, we update in device explorer. After that, we change the device properties and the twin gets updated as well.

Next, the temperature is raised to trigger the fan. Also, there is a pushbutton in this demo that simulates a device error. When the button is pressed, the device hub will show that the device needs maintenance.

So as I mentioned before, here is a product introduction video, including a quick demo as well.

If you’re interested to apply for an Azure Sphere MT3620 Development Kit to secure your IoT projects, select your version (we have 3 versions: US, EU & JP), and shop now! Also, you can shop the EU version with our EU distributor Distrelec!