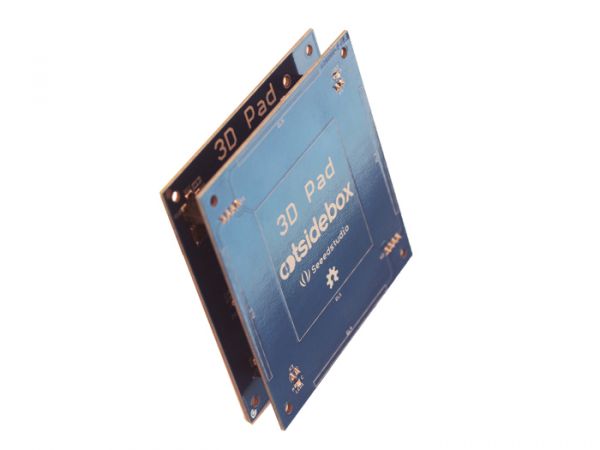 SKU
102990178
Be the first to review this product
Introduction: Make your own touchless control interface providing 3D coordinates and gestures in the form of an Arduino shield 3Dpad is an innovative and experimental system that you can use for creativity, experiments and education
$79.00
Out of stock
gesture

3Dpad is an innovative and experimental system that you can use for creativity, experiments and education.
The underlaying technology is patented and can be used freely under Creative Commons licence CC BY-NC-SA.
It consists of a sandwich made up of:
Detection principle:
To detect the proximity of the human hand or finger, we are using the projected capacitive technique. This is the principle of virtually all modern touch screens - except that now we are in the air, relatively far away from the detector surface (10 cm max).
It’s very simple: We build capacitors which are as “open” as possible, using electrodes drawn on the electrode plane PCB in order to obtain a maximum “hand effect”.
The capacitors formed by the electrodes are part of an oscillator whose frequency is influenced by the distance of a hand. When it enters the electrostatic field, this “intruder” is going to cut the field lines and divert the electrical charges.
Result: the closer the hand approaches the electrodes, the more the oscillator’s frequency increases.
The embedded software
The sketch running on the Arduino UNO will exploit the analog result in order to:
The evaluation software
Despite the fact that everything is calculated on the Arduino board, it can be usefull for you to have a software for a quick evaluation of 3D-Pad.
It's available in the form of a VB6 which (often) accepts to be installed under Windows. There is also a new one, made with Processing. This is more confortable and runs under Windows, Linux an MAC-OS X. You'll see all the values sent by the Arduino Uno, the gesture events and the 3D coordinates in the form of a cursor.
What’s it used for?
3Dpad's technology can be used in a very wide field of applications, for instance: medical & healthcare (should reduce the nosocomial risk), household appliance control (think at cooking when your hands are covered of fat content), gaming with "air control", and many other.
At the moment my favorite app is music, using 3Dpad as an "3D Air control" MIDI controller.Watch our first experiment Video
Questions / Answers :
What are the possibilities for hiding the 3D-pad behind different materials? The electrode plan PCB can be covered with glass, plastic, ceramic, wood, textile, or any other insulating material See it in this video
Who designed the 3Dpad? 3Dpad is based on my own invention (I've got granted patents on it). The current version in the form of an Arduino shield has been designed in collaboration with the Elektor Labs. A full description is available in the Elektor magazine - May 2014 edition.
How can we shape the sensing area? click to the answer here
Specification:
Weight:
Supply voltage:
Power consumption:
If you have any questions, feel free to send us an email to service.
For any technical support or suggestion, please kindly go to our forum.