It’s a super awesome experience to attend Hello Maker Korea with Violet on October 26-28th in Busan. It’s the first time for us LV Duo (Lily & Violet of Seeed Community Team) to participate in a maker event as an exhibitor in Korea (enabling us to have plenty of time to mingle around instead of being busy as organizer of our very own Maker Faire Shenzhen), and we were thrilled to meet so many local & international makers, see and experience their projects and make connections with so many local communities.

Hello Maker is a national maker event with the aim to build up a global network for makers and to introduce maker movement in Korea. Since the first Hello Maker event took place in Busan in November 2017, it spreads quickly to 7 other cities in Korea, and the one we’ve been invited to is the national event organized by Fab Monster, which is also the company behind Fab Lab Busan.

The organizing team was awesome. They helped us with the travel schedule (we got our Visa the day before we headed off to Busan, meaning all bookings in the last minute.) As the event was mainly in Korean, the team even arranged Chinese/Japanese/English translator volunteers for all global exhibitors, which is a great help for us who could not understand Korean. A huge THANK YOU to the organizers and all the volunteers who made our visit full of nice and memorable memories. 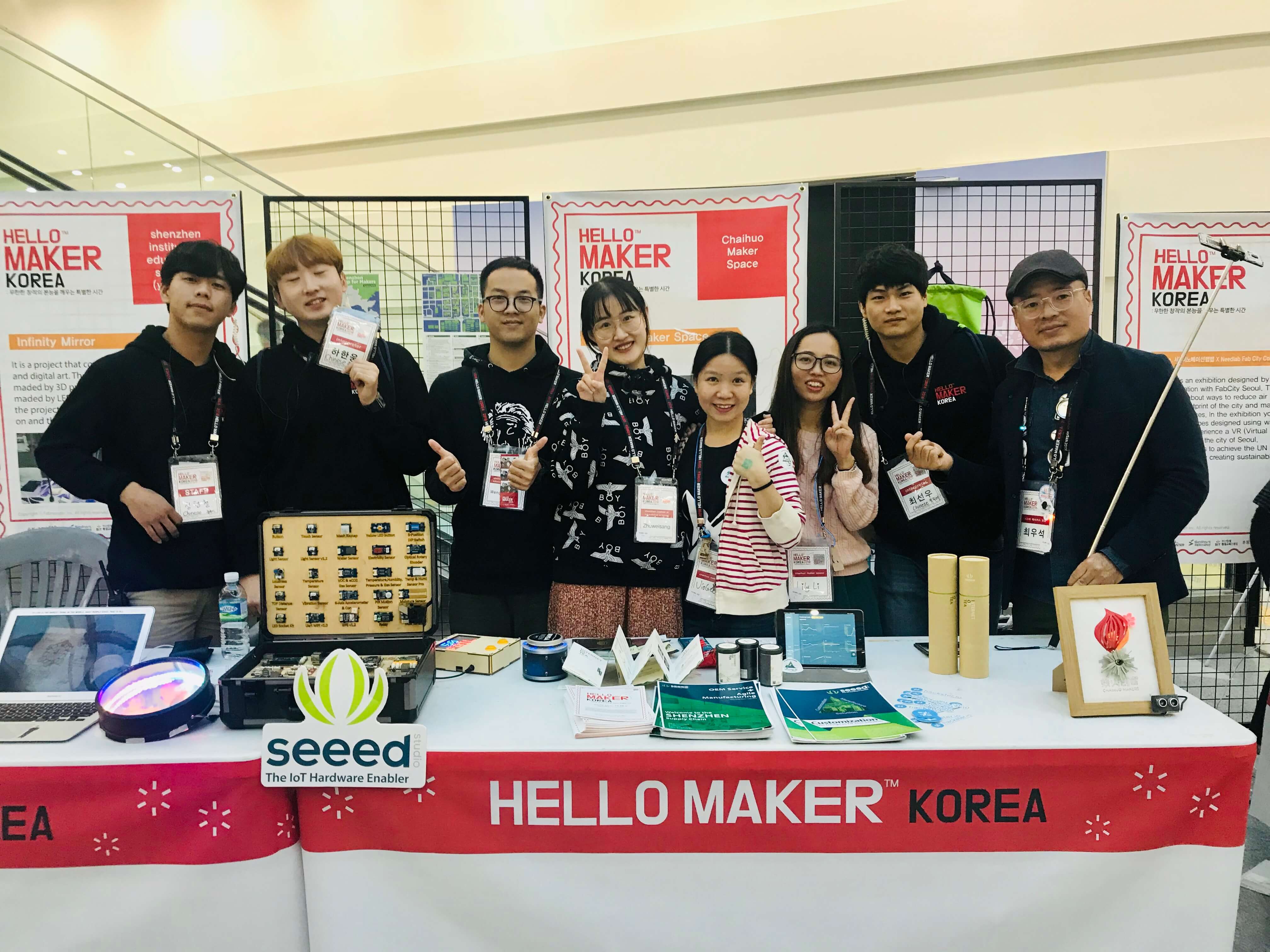 Hello Maker Korea 2018 took place in the Busan National Science Museum where is a local science education base, which also underscores the event’s roots in education and learning. That also explains the great percentage of maker education exhibits participated in the event as schools, learning communities, teachers, and students. It was so touching to see the kids who couldn’t speak English try so hard to explain how their projects worked when we visited their booths.

It’ll never make a great recap without sharing the highlights or spotlights of the event. Hope you could enjoy them as much as we did in Busan.

The Maker Shuttle made by Fab Lab Busan is equipped with all tools and stem kits enough for 120 students!!! It is a moving Fab Lab in a small trunk, traveling around to empower whoever wants to make!!! Really love the idea!!!

Also, there is another kind-of-similar-but-still-awesome project Making Cargo made by another maker space exhibiting just nearby, with even more making tools and swags equipped in a cargo. They also had a workshop in front of the cargo to invite kids and parents to get involved in making. According to the maker behind the this Making Cargo program, they had put over 20 cargos in different schools and campus.

There’re plenty of workshops that led kids to innovate with cardboard, paper, straws, and other regular materials. Our #tinybutstrong Violet Su dressing up as a cardboard-made #Godzilla, but she failed in the battle.

3D printing and 3D pen rock in Korea. I never thought they were a big deal indeed before. But the creativeness and delicacy these local makers showed through their amazing projects just blew me away. Here are some examples:

The percentage of hobbyists exhibitors was really high compared to Maker Faire Shenzhen (yes, we are workaholic, just can’t help comparing a lot). Many of my favorite exhibits were all creations out of makers’ interest! For instance, these cute and quirky automations made by 권봉서. Love the mechanism of creativeness. 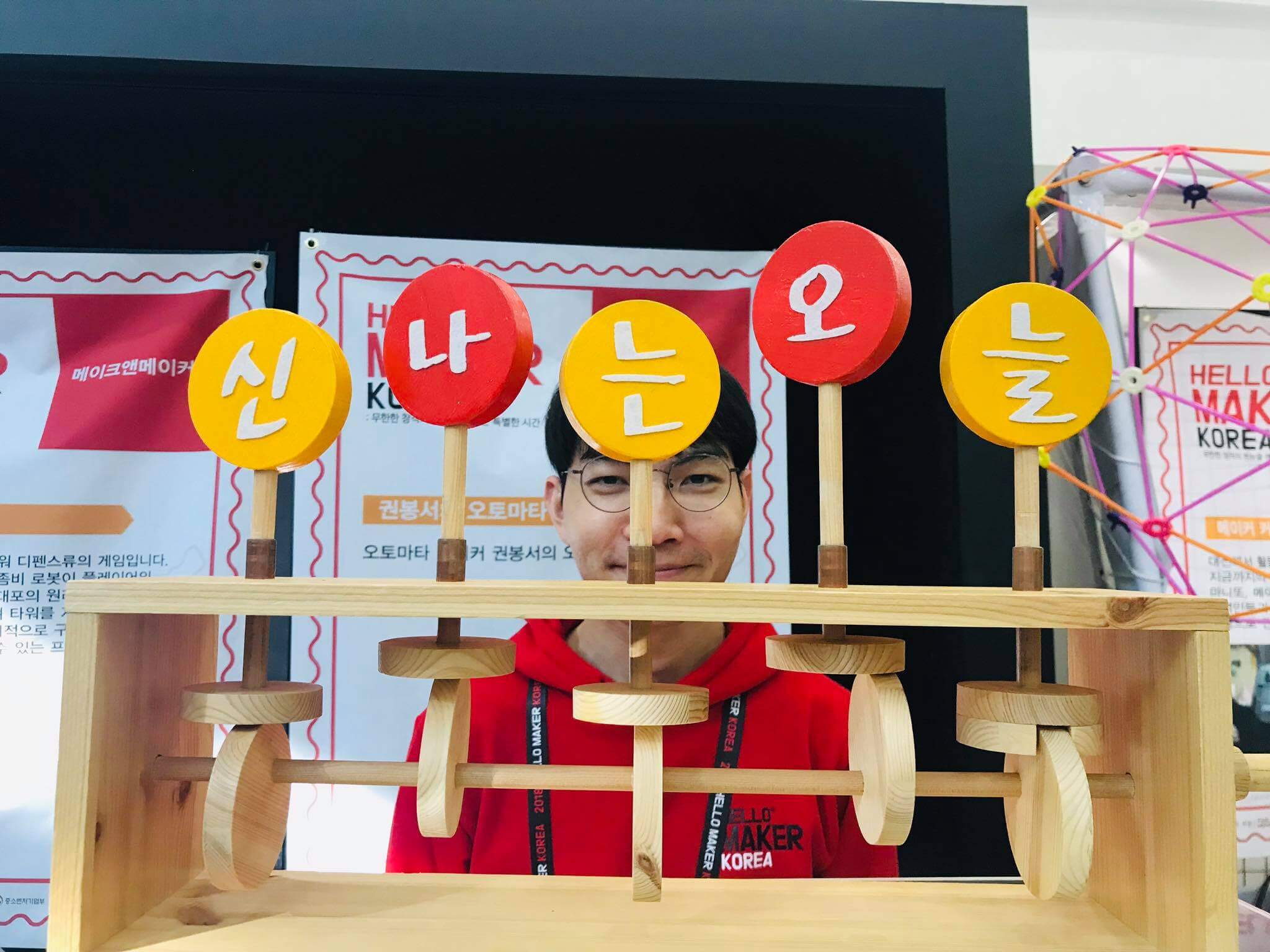 We just LOVE this Human-powered Flapping Cart made by 날개맨 Alarmed!!! Violet Su is ready for taking off!!! 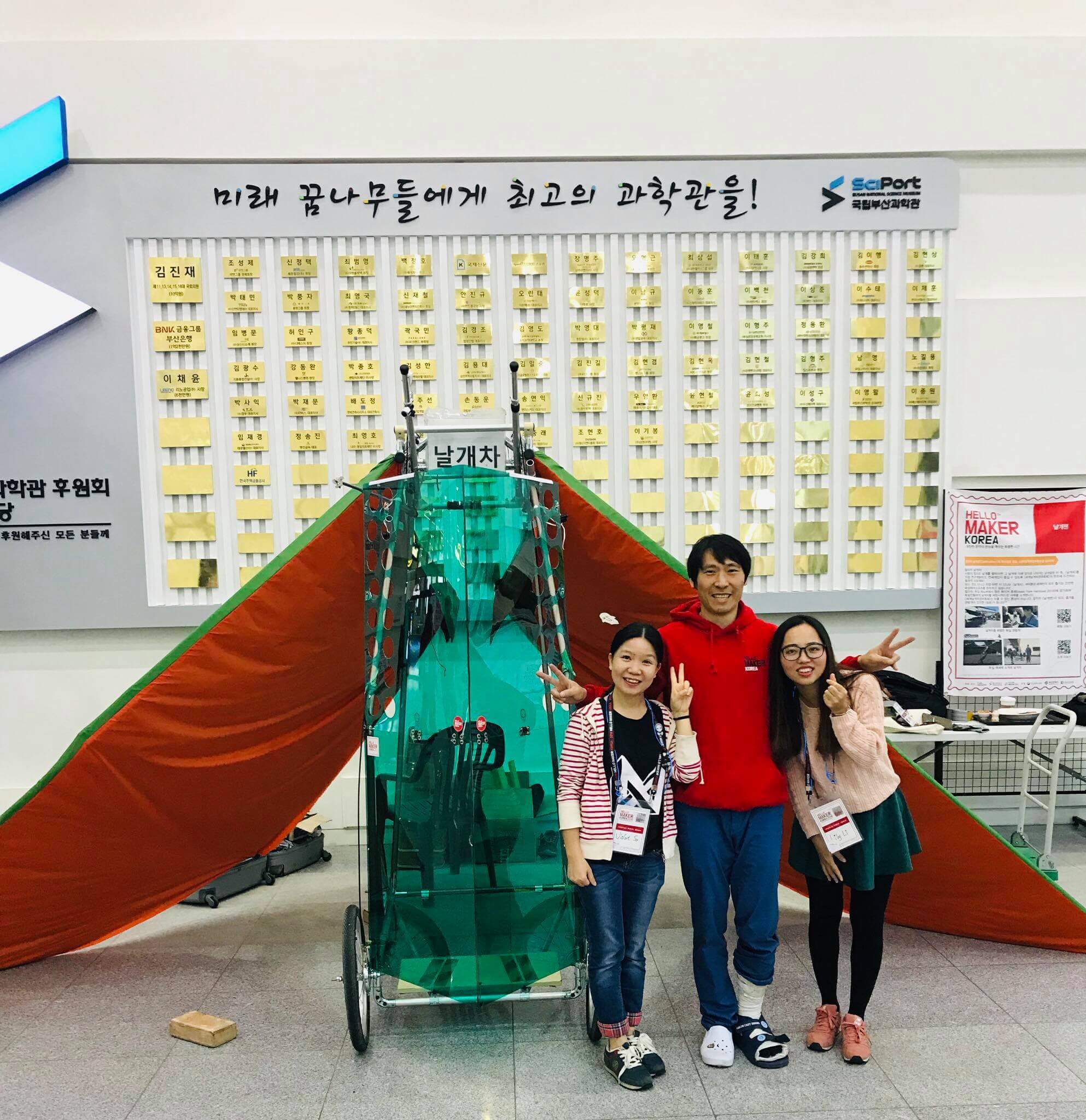 Maker Nyan‘s exhibits are all about her cat with two eyes in two colors!! Super cute!!! ???And another reason to keep pets, they could inspire you to make!! Having doubts? You should check out this cool project made by another cat lover.

Super happy to meet the 심프팀 SIMP Team at Hello Maker Korea in Busan after briefly meeting them at Maker Faire Shenzhen two weeks before we headed for Korea! We LOVE all their projects! So cool and fun!!! Yeonsoo Yura Kim gave a great presentation on October 25th as well!. Great team with great projects. ?

飯島幸太, a Japanese maker, turned the Micro:bit into the very unique Kira:bit Swords!!! He also made a Push-it Color Palette that drives you to press the buttons like crazy! He is also one of our Fusion Prototyping service users.

We’re super happy to bring our Chaihuo logo badges with us. It turns out everyone loves it. And we soldered a lot (more than 100 badges in total) on our booth as we did not get enough solders for visitors to make by themselves (feeling sad). 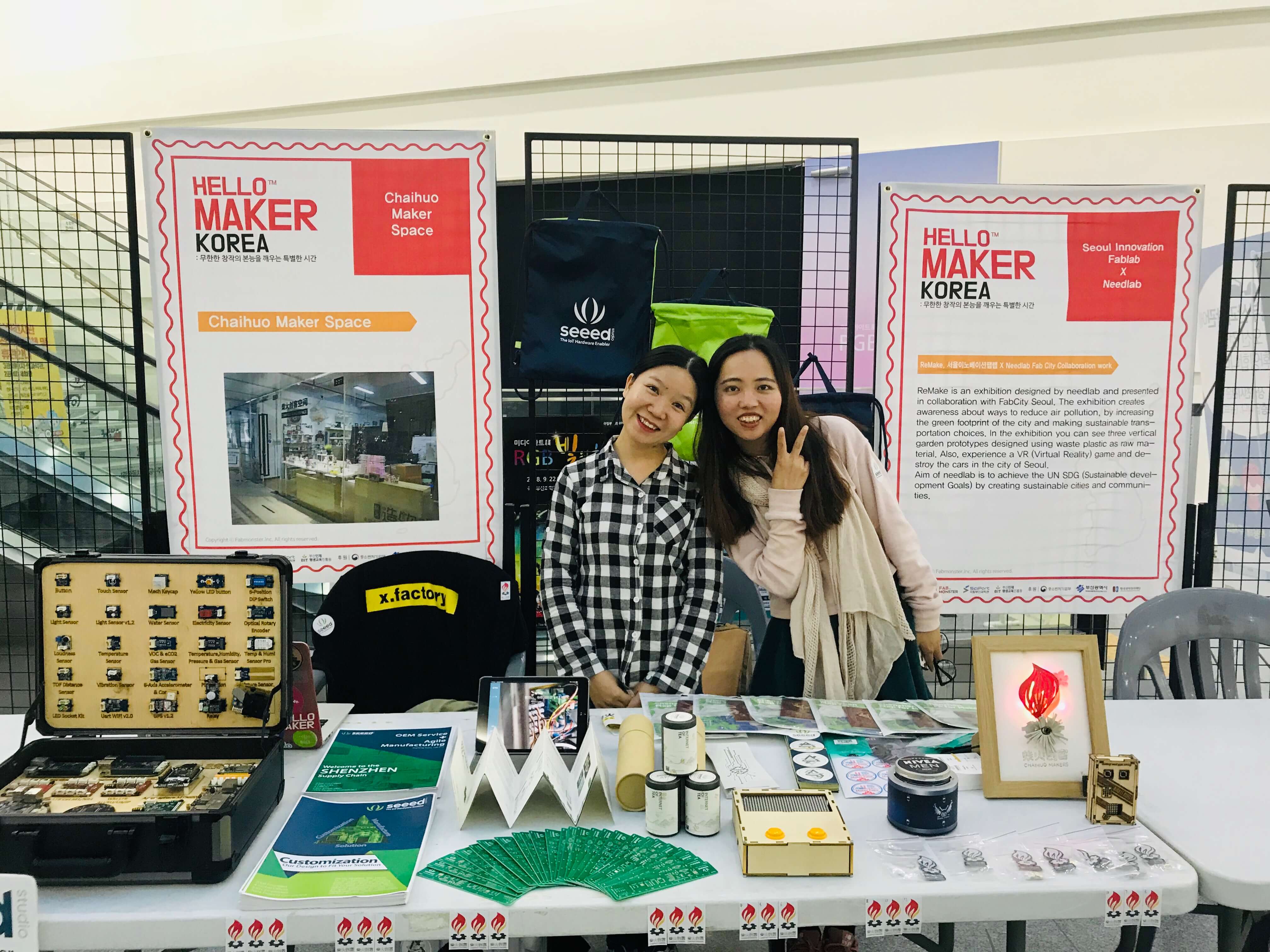 Last but not least, parties!! It did build a network for all participants with 3 networking parties in total for a 3-day event! At the end of the first day, around 100 makers gathered in the canteen of Busan National Science Museum and met each other with the help of some local, crazy but great ice-breaking games.

And there were two parties in a row in the second evening, with one in a seaside restaurant that we watched an awesome fireworks performance and got to know more local makers through more Korean games and sharing. The last party was an improvisational, small gathering of 20 people who just thought it should not be called a day yet and why not party again after coming back to our camping hall where we stayed for the whole event. We introduced who we were and why we were there and got the chance to meet the organizing team behind this amazing event. And it’s amazing to see that we can communicate with each other very smoothly and even play games with a mix of Chinese, English, Japanese, Korean and body languages. Thanks to these parties, we had a great time in networking. Thank you again to the organizing team, you nailed it!

We had a great time, connected to so many communities in Korea, and to prove it, here are two pictures that just show how we enjoyed it. Keep making, and keep connected!