The Internet of Things (IoT) has rapidly emerged as a major driver of innovation and attracted a broad swathe of developers from both the internet application and traditional embedded device spaces. Because IoT applications often involve new and untested product concepts, the market for such products is uncertain. As a result, it is critical to use a development approach that enables rapid prototyping and early user acceptance testing. If the product concept proves successful, a fast ramp to market is then needed to ward off copycat competition.

The traditional embedded development would first require a custom hardware prototype to be designed and built before any user trials could be done. This represents a major time and expense for companies that have hardware design capability, especially as the board will need to augment a processor or microcontroller (MCU) with wireless connectivity and sensors. If you’re an internet application developer, it’s a show-stopper because you probably don’t have access to hardware developers. While evaluation boards can help get you started, it is often hard or impossible to customize them for your specific end application, and they are readily available for deployment in large-scale user trials that might involve hundreds of users. 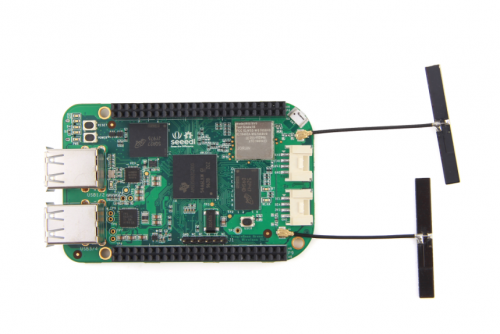 The 1-GHz Sitara™ AM3358 processor, the heart of the Seeed Studio BeagleBone Green Wireless, offers a perfect “Goldilocks” performance-to-power ratio for IoT endpoints or low-cost gateways. It has the performance to efficiently run embedded Linux®, which opens up a wide choice of IoT service connectivity, and its low power means you won’t need to worry about your temperature sensor getting bad readings!

Once you have a working prototype, BeagleBone’s proven open-source hardware business model enables you to quickly move to larger scale deployment. Many IoT applications require a significant number of prototypes for adequate feasibility testing. The low cost of the Seeed Studio BeagleBone Green Wireless makes it practical to deploy the standard board for large scale feasibility testing or even low-volume production products. You don’t need to commit to a customized board design until you have proven your idea works on a real-world scale. The Seeed Studio BeagleBone Green Wireless’ open-source hardware enables your hardware design team or partner to quickly create a cost-optimized version, without having to design from scratch. Want to cost-optimize your board, but don’t have access to hardware design or manufacturing resources? No problem! Seeed Studio offers design and manufacturing services to allow you to quickly scale to higher volumes.