TLDR; Arduino recenlty releases a new IDE targeting Professional developers, In this blog post we will look into some of the features and how to use them.

Ardunio.cc release a new powerful IDE for Arduino development, and its have some most awaiting featuring. This month Maker Faire Rome on Saturday, October 19th at 16.00 CET, Massimo Banzi and Luca Cipriani will push the button to release the new Arduino Pro IDE (alpha).

The main features in this initial alpha release of the new Arduino Pro IDE are:

But the new architecture opens the door to features that the Arduino community have been requesting like these that will be following on soon:

The Arduino CLI running in daemon mode provides all the main Arduino features.
The application frontend is based on the Eclipse Theia Open Source IDE.
Electron, the framework behind Eclipse Theia, allows the use of web technologies on desktop environments.

First Download the IDE from the link below mentioned

Here I am using window computer and I downloaded the Pro IDE Zip file then extracted. it’s an executable format rather than an installable package so we can use if don’t have admin access.

run the application by clicking Arduino-PoC.exe .

From the following window Select Dark Theme, and Enjoy it.

In the top right corner use the toggle near the serial monitor to enable the Advanced mode.

It’s now in the Alpha Preview Release, so many bugs ? are living inside this version, some issues I faced is, the board manager is not loading properly stuck somewhere, board model name is not visible in some models also we need to install the Arduino Uno board manager to in order to get a start.

Like the board manager, Library manager have the same looks and some bugs too, some times network can’t reach the server to fetch the libraries and I didn’t find any option to install the library as ZIP format, hope they will add to next iteration .

Auto-Completion is a nice feature, that’s working good right now, I tried to write the Hello Worl Sketch a.k.a Blink to check the auto-completion and it’s good.

you can see that above when I type Digi it detect and gave the suggestion to complete the keyword.

Git Integration is essential when we are working with VSC (Version Control System ) like Github and Gitlab or other Git supported VSC to control our versions.

Can’t see nothing many upgrades in Serial monitor, just as class features only UI differs.

The main additional features are Auto completion and Git Integration also Dark Mode too ( ? ) . and they are planning to add more features like Debugger and Extension features. we can expect in the future also it’s a good thing that Arduino IDE is evolving and focusing the professional developers.

It’ an Alpha Preview Verison 0.0.1 so if you found any bug please report in the Github Issues so the team can solve these issue in the next version.

Happy hacking  ? and let us know your feedback on the comment section. 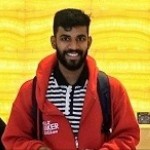