PORTEL company introduced the circuit design software (CAD) PROTEL in the circuit industry in the the late 80s, 20th century, which is deservedly ranked highly among many EDA software and is circuit designers’ preferred software.

Many universities’ circuit specialties have the specific courses to learn how to use PROTEL, and almost all of the circuit companies have used it for their work.

Altium Designer 20 has been released, with new features that improve the overall user experience, and its fluency and smoothness have been improved. In this version, the arbitrary-angle routing function is newly introduced to complete the escape routing of dense BGA packages, the routing optimization processing is also improved, the new DirectX accelerated schematic editor engine, and many other enhancements.

It is good for one or two layers’ board, however, it becomes a little bit hard to use when it comes to more than 4 layers, not to mention the PCB design in signal transmission of high frequency and high-speed digitization.

You can describe it as the king of CAD on the low side. As far as I am concerned, it is the best EDA among the similar EDA for its easy-to-use, easy-to-learn. The quality of the design would not be worse than wg, allegro. It is the most widely used EDA in the market and it is also very suitable for small companies.

ORCAD is the EDA software developed by ORCAD in the late 1980s. It is as old as protel,but it is worse even than Protel. However, ORCAD’s principle enjoys great fame in the industry since its friendly user face, simply operation fuction, and strong function of simulation. Based on the input of the schematic diagram, a powerful component information system is added, which can be used to create, track and authenticate components, which is convenient for the reuse of the optimized library and the existing component library. Comparing to DX designer, I vote for Orcad. But DX designer has a better management function, better-integrated environment.

It belongs to WG mentor. They introduced WG 2005 based on Windows. Lay out comes first to identify whether it is a great software when there are obvious advantages and disadvantages in the medium and high market. I have to say WG2005 is amazing in layout, it can be said as the king of layout since it has a strong function in layout automatically and the layout rule is very professional. ExpeditionPCB is the core of WG, and Wg 2005 contains DX，DC，DV，LIB，EXP.

It has a friendly user face and strong schematic diagram function. It is not free but its price is acceptable. It has super functions like online positive and negative annotation function, batch command execution script file, copper cladding, and interactive follower.And EAGLE supports Windows, Linux, and Mac three platforms. Besides, the library of this software is very rich, and scripts can be used, and it comes with CAM tools.

Kidcad is an opensource software and it abides by GNU’s GPL copyright agreement. Kicad uses graphical user interface, which is very convenient to use with the mouse and keyboard, moreover, you can use is Windows and Linux. 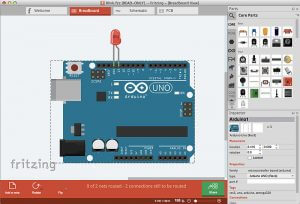 Fritzing is an open-source initiative to develop amateur or hobby CAD software for the design of electronics hardware, to support designers and artists ready to move from experimenting with a prototype to building a more permanent circuit. It was developed at the University of Applied Sciences Potsdam.

PCBWeb Designer, ZenitPCB, TinyCAD, Osmond PCB, BSch3V, ExpressPCB, gEDA, Fritzing, DesignSpark PCB If you are a student or a amateur, you may not need to use above three layout software. You can just use KIcad or some free online PCB design software, with free design software and $4.9 pcb prototype order in Seeed Fusion, you can get your pcb affordable and easily. We will focus on free PCB software introduction next time.